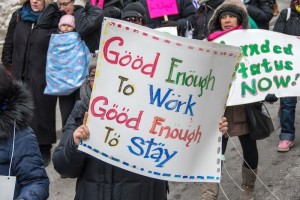 New foreign caregivers will now fall under the Temporary Foreign Worker program. That means the end of Canada’s Live-In Caregiver program, started in 1992, 22 years ago.

Just how quiet were the changes? Who or what bodies were discussing them? And what do the changes mean?

Dr. Ito Peng is interested in those questions. She is principal researcher of the Gender, Migration, and the Work of Care project. Theoretical and Empirical Bases for Reconceptualizing Care, Work, and Migration , Dr. Peng’s sub-project, explores how various social institutions shape and frame care policies.

“The Filipino community is really upset, because it means the end of their right to residency,” says Peng. Most migrant caregivers in Canada are now from the Philippines.

“But the general public tends not to know about this. Despite how significant caregiving is in societies’ economies, you don’t really hear about [such changes].”

Under the old rules, all migrant caregivers  in the program could apply for permanent residency after working 24 months as a live-in caregiver for children or elderly people.

But the new Temporary Foreign Worker Program now governing future applicants restricts that number: 2,750 nannies, and 2,750 caregivers for people will high needs will be permitted to apply.

Dr. Monica Boyd, who is researching the history of migrant caregiving in Canada, says it’s unclear if the federal government will use a lottery system, or what will happen to the people who are not chosen.

Boyd says it’s difficult to determine with public statistics how many women changed their migrant status under the Live-In Caregiver program, and as a result, academic accounts vary.

One Citizenship and Immigration Canada report says 5850 people entered under the temporary Live-In Caregiver program in 2004, but the same agency’s 2009 trend data puts the 2004 figure at 6708.

The federal government said in 2010 that 90 per cent of foreign nationals who entered the Live-In Caregiver program with a work permit applied for permanent resident status, and 98 per cent of applications were successful.

Types of caregivers under new rules: caring for children, and caring for people with high medical needs