“Skype helps, but it’s not enough”

Imagine, for a moment, looking after other people’s children for a living, while unable to see your own. When Edelyn left the Philippines to work in Singapore and Hong Kong ten years ago, her eldest child was seven. This year that child is turning 16. Edelyn has seen her children only twice since she left.

It wasn’t supposed to turn out this way. Edelyn migrated to Canada largely because Canada’s Live-in Caregiver Program promised a route to permanent residence after two years of work. Like most immigrants and migrant workers, when Edelyn first came to Canada in 2009, she thought she was in the land of milk and honey—a place of boundless opportunities. As time passed, she began to see Canada as the land of backbreaking jobs and long hours instead. And the promise of permanent residence after two years proved to be an empty one.

Edelyn has been working in Canada for seven years, and her application for permanent residence has yet to be granted. Due to the current backlog in processing, the average wait time for permanent residence is between five to seven years for live-in caregivers. Meanwhile, her children’s birthdays and graduations come and go. She tries, from afar, to have a presence at these celebrations.

Life is full of uncertainty. The temporary status of caregivers, Edelyn explains, puts them in a vulnerable position. “On the contract it says that I work for eight hours a day. But if you’re a live-in [caregiver], it doesn’t really follow the contract you signed,” she recalled. “You’re on call 24 hours because you’re living in your employers’ house, so anytime they can wake you up if they need your help. If the kids are sick or they leave to go to a party and come home late, you have to wait for them. You’re not being paid for those overtime hours,” she added.

She feels that it is ironic and difficult to bear the idea that she’s taking care of her employers’ kids while she can’t take care of her own. “It’s a big responsibility as a worker and a mother. It’s very hard as a mother, not only for me but for all caregivers that I met and spoke with.” She also said that if given a chance to choose the work that she wanted, she wouldn’t want to be a caregiver: “I’d rather be a teacher. But it’s difficult because you can’t practice what you studied back in the Philippines. You’re back to scratch.”

Currently, she has an open work permit. She works as a caregiver during the weekdays and as a dietary aid on the weekends. She hopes her dreams turn to reality soon. In the meantime, she waits for the day she will see her children beyond a computer screen. 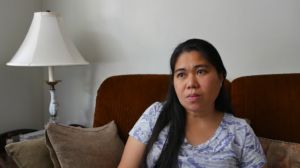 Total number principal applicants who came to Canada under the Live-in Caregiver Program (LCP) between 1993 and 2009, excluding dependents (2011)