“I’ve been fighting for my independence…”

It was a privilege to interview Elaine Fantham just a few weeks before her passing in July 2016.

Elaine lived in an assisted living retirement home for the last six years of her life before she passed away at 83. She required physical help for personal hygiene, changing bandages, and getting up after a fall, and received multiple visits a day from caregivers and Personal Support Workers. Elaine seemed almost indifferent to the fact that she needed physical support. She approached her physical needs as simply a technicality, while fighting hard to keep her intellectual independence.

“I’m amazed by how little my fellow residents spend thought on what they’re doing: their taxes, their banking, the real world that they came from. They have a son or a husband or a father or a paid accountant who does it for them. They don’t seem to care [about their independence]… I’ve been fighting for it.”

Elaine said elderly people are often “lulled into” a life where they are no longer respected or thought of as independent adults, and become invisible. She refused to accept this role. Elaine was a member of the Classics department at University of Toronto for over 20 years, and a world-class authority on Latin. She was translating a new collection of Latin letters into English for a major American publisher up until the last days of her life.

Elaine was satisfied with the care she was receiving at her private retirement home, but was fully aware that most could not afford the $4000 a month her small apartment costs. “We are privileged in the sense that we have more money than most people, and we know lawyers.” These resources secured a superior level of care for Elaine. Her story highlights a sad truth – often, in Canada, the more money you have, the better care you will receive.

It is time to make care more affordable and to allow those receiving care to maintain their independence and dignity and keep doing the things they love. Elaine had such an important and nuanced perspective on this, and it was a pleasure to hear her story about what it’s like to live as an elderly person receiving care in our society. 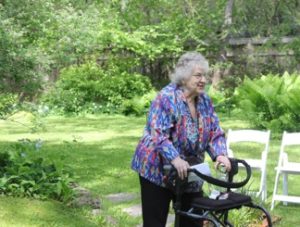 Percent of residents in nursing homes who require assistance with daily activities like bathing, dressing, and eating (2011)

Is the projected cost of Long Term Care in Canada over the next 35 years. At current levels of government funding, half  would go unfunded. (2012)