“I needed someone willing and able. Did it mean it was the best person?”

It’s hard when you need a certain kind of care but it isn’t available to you. Lucy Abernathy faced this frustration when her 83-year-old mother, Elvira, lost her ability to speak English after a stroke brought on progressive forms of dementia.

Elvira came from Azores, Portugal, to Canada in 1967. After her stroke in 2010, Portuguese became the only language she could communicate in. She needed someone who spoke the language, who was also willing to provide live-in care in Elvira’s home.

Elvira’s care needs were pressing. “An example is when she put the garbage in the oven, or when she forgot to turn off the oven…she’s incapable of taking care of herself—not even washing herself!”

Unfortunately, it quickly became clear that they would have difficulty paying for a worker secured through an agency: “ … they want to make hourly pay… you are looking at $5000 a month. Who has that type of money? Not my parents!” There was another serious problem. Lucy was told that her demand for a Portuguese-speaking live-in caregiver could not be accommodated by the agency she contacted.

Lucy turned to friends for advice, and heard that others had found caregivers through classified ads in Toronto’s Portuguese Newspaper, Familia Portugesa.

What are the risks of going through a newspaper to find a caregiver? As Lucy encountered, there isn’t any screening whatsoever. “You have to trust that they are being honest,” she said.

It did work for a while. Over a period of six years, Lucy affordably hired three caregivers through the newspaper, and was fairly happy with the workers she found. One of the women she hired actually came to Canada from Portugal for this job, which her Aunt (who lives in Toronto) had spotted in the community newspaper. But Lucy soon discovered another risk of turning to the informal economy – the lack of back-up workers. The turning point for Lucy came one day when she came home from work and found Elvira’s caregiver sick in bed, with her mother unsupervised.

Lucy has been Elvira’s primary caregiver ever since. Lucy reveals, “it’s now my generation that deals with our parents, ourselves, and our children. We are in this age group where we still have kids at home, our parents need us, and we are still young enough that we have a life.” This is referred to as being in the “sandwich generation.”

In order to meet her mother’s needs, Lucy took early retirement. She is only 55 years old and finds looking after her mother difficult – but she doesn’t feel she has a choice.

Lucy says she’ll continue to try and find an affordable caregiver that meets her cultural care needs. In the meantime, she’ll provide the care that Elvira requires.

Is Lucy the best person to provide her mother’s care? Lucy feels that, at the moment, she’s the only person. 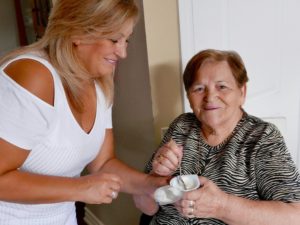 of caregivers are considered “sandwiched” between caregiving and childrearing (2012) 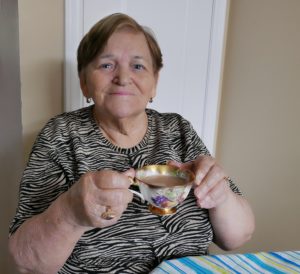 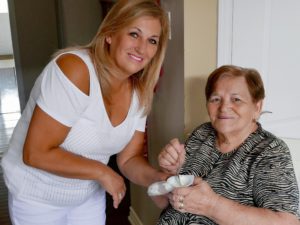