Financial instability. Learning a new language. Acclimatizing to a different culture. These are the challenges that we know many new immigrants face. But what about the challenge of trying to provide care to a suddenly ailing family member in the middle of all this?

When Azzedine came to Canada in 1997 from Algeria, he wanted to give his family a better life. Barely fluent in English, he worked and studied diligently to sponsor his brother, sister and mother to come to Canada to build their new home together.

Arranging care for his mother was a challenge he didn’t anticipate. When she first fell ill, he “…thought it would be a piece of cake. You look after your mother. What’s the big deal? But you don’t know the actual struggle until it happens to you.” Since hiring a caregiver is expensive, he decided to care for his mother himself. But he also had to work to support the family financially. Doing both proved to be far from easy.

For a long time, Azzedine was solely responsible for driving his mother to the hospital, keeping track of her medications, and looking after her on a day-to-day basis, before and after work. Luckily, his sister Safia recently arrived in Canada, and now helps him take care of their mother.

Making care work a shared, familial responsibility makes sense to Azzedine. “For me, that’s how we were raised. As a family, everyone helped out around the house,” he says. On the other hand, he wishes there was more support available. “Thank God I have my family to look after my mother. But what about other people?”

Despite the difficulties,Azzedine takes pride in caring for his mother. He expresses his deepest gratitude for his family, especially his mom. “I love her. My mother is the apple of my eye.  She worked hard when she was young. Now, it’s our turn to take care of her.” 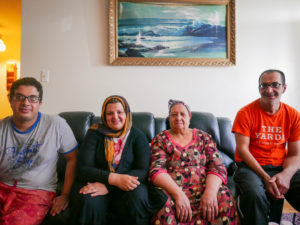 Percent of care provided to individuals with long-term conditions through informal caregiving – unpaid care given by family, relatives, and close friends (2015)