“The wound that people get from being excluded is the worst thing. People don’t recover from that.”

In his obituary, Martha Eleen said that her son Gabe, “died from complications of poor medical guidance over many years.” Throughout his 39-years of life, Gabe was neglected by the medical system. The fact that he had cerebral palsy, was blind, and experienced epilepsy should not have resulted in a lifetime of being refused basic human rights and the ability to plan for his future. Unfortunately, because of the disability bias that is embedded in our culture, Gabe had no access to the care services he needed.

Martha explains that there were virtually no services or funding available to Gabe, and the few that did exist were not equipped to support him. “From quite an early age, the only placements [Gabe] could get offered were in nursing homes with Alzheimer’s patients where they have a locked environment.” Martha had to build a support circle all on her own, while simultaneously providing care for Gabe and working a full-time day job as a single parent.

Martha and her support circle knew that they were the only ones who could provide the care that Gabe needed. This is why they lobbied the government for individualized funding for personal assistance, which had only ever been granted before to one person in Canada, the late Judith Snow. Individualized funding offered Gabe more than just the flexibility to tailor services to his needs—it was the only way to ensure that he was cared for with dignity and respect. “We wanted to have control of who we hired because we had a vision of who Gabe is and how he could participate in the world,” Martha said.

Even though Martha was totally marginalized from the health care system, she still recognizes that she has certain privileges that allowed her to fight for her and Gabe’s rights. Martha acknowledges that this is not the case for everybody. “I come from a middle-class background, I speak English, and I was so marginalized by this fight. And I have no idea what it‘s like for people who are poorer and can’t speak English. I mean they just can’t access anything.”

So why was Gabe so neglected? Martha believes that it’s because of a deep-rooted disability bias that is prevalent in all aspects of our society. “There’s no vision in the government agency because of the disability bias for Gabe having value in the world and participating. He’s considered, you know, a bed and a welfare cheque and it’s just money attached to labels. There’s no consideration for quality of life at all.”

Gabe’s disability affected his access to long-term health care. Ultimately, Martha was fighting for Gabe’s life to be seen as valuable. She wanted him to be respected, to be heard, and to be considered as a human being who has a life that is worthy of being lived.

“I gave up my privacy in order for Gabe to be visible, because he could have just easily disappeared.” 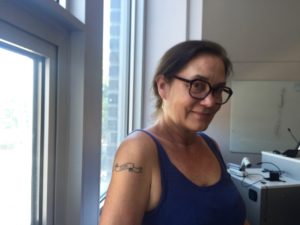