Fierce, tenacious, and persistent. That’s how leZlie Lee Kam identifies, in addition to being a brown, Carib, Trini, Callaloo dyke. leZlie’s been politically active in the LGBTQ+ communities since coming out as a dyke in 1976. Former Chair of the Senior Pride Network, she advocates for improved care services for LGBTQ+ people, particularly seniors and trans people.

This advocacy stems in part from from leZlie’s own 7 years of experience as a home care recipient. “I was suffering from psoriasis, and I went into a deep depression and used alcohol to cope. And that’s why I went into the coma—because of alcohol poisoning,” leZlie explains.

She was in the coma for 2 months. When she woke up, she spent 4 months at Bridgepoint, a Toronto rehabilitation centre. After that, she started receiving home care, accessed through Central Community Care Access Centre (CCAC).

“When I came out of the coma, my body was scarred from the psoriasis. The personal support worker (PSW) shows up, and I start taking my clothes off—she knows on my chart I’ve had psoriasis. And I’m already, you know, in front of a stranger and have to take my clothes off and get naked, and she jumps back and says, ‘Oh God! Look at you!’”

leZlie was already at her most vulnerable—naked in front of a stranger she’s never met, feeling low because she’d been sick, and now faced with a PSW who thought her psoriatic scars were contagious. “Then she found out that I was a lesbian, which made matters even worse,” leZlie recalls.

leZlie says that her experience is common for LGBTQ+ people who receive personal care, especially among seniors and trans people. Some queer people are going back into the closet when receiving care because of the stigma that’s attached.

But leZlie is fierce, tenacious, and persistent, and she and the rest of the Senior Pride Network are working to make home care more equitable for LGBTQ+ recipients. leZlie is a volunteer trainer with the 519 older adult education program, and is working with VHA—one of the largest home care agencies in Ontario—to deliver anti-oppression and trans inclusion workshops to all of VHA’s employees.

leZlie’s work to improve the experience of home care for LGBTQ+ people doesn’t stop there. She stresses the importance of meaningful cooperation between policymakers and community members.

“For me, policies are the backbone for making change happen, so I work from the top-down and the bottom-up. That’s how I operate. And hopefully we will meet in the middle and things will change.” 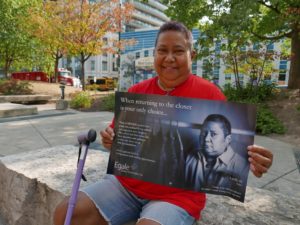 Percent of lesbians do not have a regular doctor, compared to only 12% of heterosexual people (2008)